In a small office in central Seoul, a group of people surround a machine with buckets filled with shredded plastic.

“This is a keychain that we made by recycling plastic bottle caps,” said Yona Kim, project manager at the Korea Federation for the Environmental Movement, referring to the process in which the waste of plastic are used to make something of greater value than the discarded original. Object.

Yona Kim, founder of a group called Plastic Mill, shows off pieces of broken plastic bottle caps ready for recycling at the group’s office in central Seoul on February 19, 2021. (Kyodo)

A few minutes later, the molten plastic was extracted from the machine into various types of molds. With a few delicate adjustments by the workers, came out some key chains as well as soap savers and tube squeezers.

The initiative, organized by a group called Plastic Mill, founded by Kim, 27, last July, is just one of the ways increasingly environmentally conscious Koreans are tackling plastic waste – an issue that has grown in importance during the coronavirus pandemic as more plastic packaging is thrown out of food deliveries.

“The problems with plastic waste were serious even before the coronavirus. But I think people now understand their seriousness,” Kim said.

Concern over the growing use of plastic, meanwhile, has also fueled concerns about climate change. After being used, plastic waste that is not recycled is either buried or burnt – and what is burned releases greenhouse gases.

Plastic Mill focuses on plastic bottle caps as these are often not recycled due to their small size. They are brought in by members of the Sparrow Club, a group of Plastic Mill supporters. The name comes from an old Korean adage that “a sparrow can’t just walk past a windmill” to refer to people who can’t miss what they like or think is beneficial to them.

Two thousand people participated in each of the Sparrow Club’s first and second “terms”, which began last July and September respectively, according to the group. Some 6,000 people joined the third term – or admission – which began in March and the majority of participants were women in their 20s and 30s.

As South Koreans suffered from the coronavirus pandemic in 2020, there were concerns that the country was also starting to suffer the effects of climate change. Among the apparent signs were 54 consecutive days of rain in the summer, which the Korea Meteorological Administration said was a record for the season.

“With signs big and small of environmental problems, people seem to be looking for what they can do on their own” to solve the problems, Kim said.

But while welcoming the popular involvement, she stressed that nothing substantial can be achieved without the government taking effective action quickly.

According to the government, a total of 73.4 trillion won ($ 65 billion) will be spent to implement Green New Deal policies such as construction of environmentally friendly buildings, creation of green belts in cities. and the promotion of electric vehicles and hydrogen cars.

Moon also announced a goal of net reductions in carbon dioxide emissions by 2050 last October, in line with international momentum to tackle climate change following the United States’ decision under President Joe Biden to return. to the 2015 Paris Agreement.

Yoon Hyeon Jeong, a 16-year-old activist, was nonetheless skeptical of the sufficiency of official action.

“Will there be as many real improvements as the ones that policymakers have been talking about? I’m not so sure,” said Yoon, who is part of the Youth 4 Climate Action movement of teenage activists.

She said she was shocked when she first learned that the climate crisis was not a distant problem involving polar bears, but one that could affect teens like her now.

“After that moment I went vegan, I went out on the streets with signs alerting people to the seriousness of the situation, but I quickly started to feel helpless because the climate crisis is a systematic problem,” said Yoon, explaining why she joined the Youth 4 Climate Action Group. 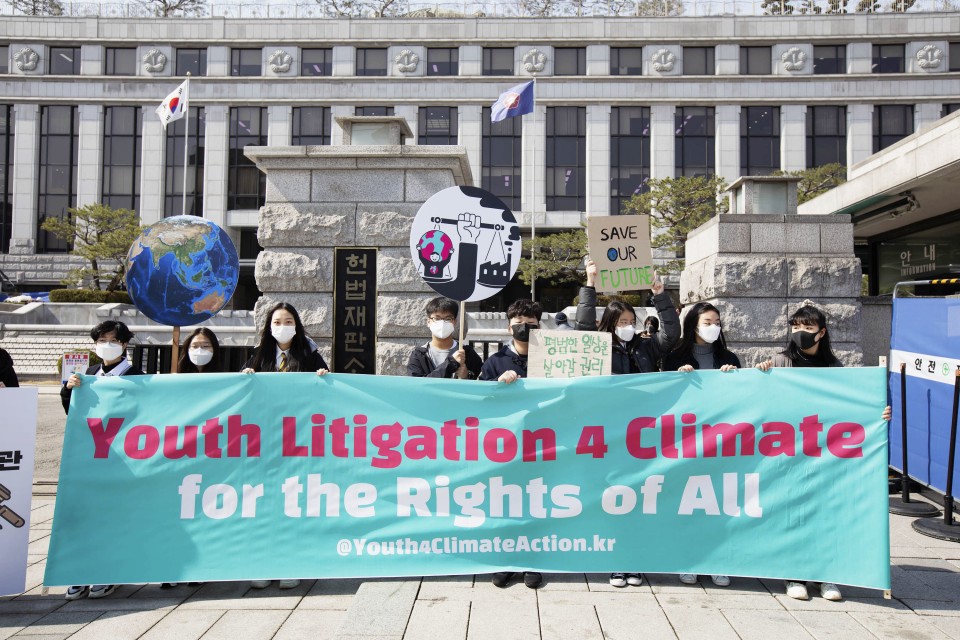 Yoon and other members have carried out projects such as filing a constitutional complaint against the government. In the appeal filed in March last year, they claimed that the government had violated the Constitution by failing to implement a law aimed at reducing emissions, which violated the basic rights of South Koreans, including the right to a clean environment and the right to life.

Lee Byung Joo, an attorney who worked with the teens in the trial, said that since the law does not oblige the government to achieve the goal, he should have legal teeth.

“Now that the Moon administration claims to reduce carbon emissions to zero by 2050, for that to actually happen, that very target would have to be declared as law so the government can be punished if it fails. not achieve the goal, ”he said. .

South Korea, which was not among the industrialized countries committed to reducing greenhouse gases under the Kyoto Protocol adopted in 1997, has so far failed to meet any of its reduction targets. since setting a goal for the first time in 2009.

That year, the government of then-President Lee Myung Bak announced that it would reduce greenhouse gas emissions by 543 million tonnes by 2020. In 2016, under the administration of Park Geun Hye, the target was newly set at 536 million tonnes by 2030.

According to the Climate Action Tracker analysis produced by two European research groups, which tracks government climate action in 36 countries and the European Union, covering 80 percent of global emissions, South Korea “is far from achieve the emission reductions necessary to limit warming to 2 C, let alone 1.5 C under the Paris Agreement. “

The CAT called South Korea’s 2030 target under the Paris Agreement and its existing climate measures “grossly insufficient,” meaning that if all countries follow Korea’s approach. South, global warming could reach more than 3 C to 4 C above before. industrial levels.

Kim Seo Gyung, who also participated in filing the petition, said his group is planning several new projects to raise awareness of the climate crisis.

The 19-year-old freshman at the university said it was difficult to plan for her future when she felt unsure of how the climate crisis would unfold in 10 years.

“I would like not to worry about the environment as soon as possible. I hope that everything will be sorted out soon so that I don’t have to think about it anymore, even if it seems totally impossible at the moment.”